Global Music Partnership
​Orchestral & Chamber Music Training and Performance Program
Apply Now
Discover "how playing an instrument benefits your BRAIN"
PLATO
~...Musical training is a more potent instrument than any other, because rhythm and harmony find their way into the inward places of the soul, on which they mightily fasten, imparting grace, and making the soul of him who is rightly educated graceful, or of him who is ill-educated ungraceful; and also because he who has received this true education of the inner being will most shrewdly perceive omissions or faults in art and nature, and with a true taste, while he praises and rejoices over and receives into his soul the good, and becomes noble and good, he will justly blame and hate the bad, now in the days of his youth, even before he is able to know the reason why; and when reason comes he will recognise and salute the friend with whom his education has made him long familiar.

~Yes, he said, I quite agree with you in thinking that our youth should be trained in music and on the grounds which you mention.

~Just as in learning to read, I said, we were satisfied when we knew the letters of the alphabet, which are very few, in all their recurring sizes and combinations; not slighting them as unimportant whether they occupy a space large or small, but everywhere eager to make them out; and not thinking ourselves perfect in the art of reading until we recognise them wherever they are found:

~Or, as we recognise the reflection of letters in the water, or in a mirror, only when we know the letters themselves; the same art and study giving us the knowledge of both:

~Even so, as I maintain, neither we nor our guardians, whom we have to educate, can ever become musical until we and they know the essential forms, in all their combinations, and can recognise them and their images wherever they are found, not slighting them either in small things or great, but believing them all to be within the sphere of one art and study.

~And when a beautiful soul harmonises with a beautiful form, and the two are cast in one mould, that will be the fairest of sights to him who has an eye to see it?

About the Program.
The GMP Orchestral & Chamber Music Training and Performance Program offers a creative and inspiring environment for pre-college and college age musicians, as well as amateur adult musicians of all social, cultural, and economic backgrounds to come together to rehearse and perform classical chamber and symphonic masterworks and contemporary music under a world-class professional conductor, as well as distinguished coaches.

We seek to attract both students headed to conservatories and college music programs, as well as students and adults who love music but aspire to other careers. By combining their collective talent, intellectual curiosity, and discipline, our goal is to transcend their technical limitations to interpret and perform programs that model professional ensembles and orchestras, to achieve the highest possible musical excellence, and to develop a passion for music that lasts a lifetime by building a community that will be the future of culture. We are committed to developing a platform offering scholarships and stipends in order to assure that no one is excluded due to a shortage of funds.

​The Global Music Partnership Orchestral & Chamber Music Training and Performance Program is committed to build a synergic comprehensive network connecting the fields of arts education, performance, community service both locally and globally. Through performances, outreaching into the surrounding community as well as international tours and festivals, we strive to make a strong impact on young lives that will result in long lasting musical and personal relationships.

In Summary, the The Global Music Partnership Orchestral & Chamber Music Training and Performance Program will:
Apply Now
Who can apply?
Anyone who loves music and aspires to play in ensemble, regardless of age. Each applicant will be considered for appropriate ensemble based on one's performing level and age group via submitted application with recorded audition (YouTube, Vimeo or other video platform) links.
Ensembles
Led by Maestro Daniel Spalding and supported by Ewing Township Mayor Steinmann, the GMP All-Star Youth Orchestra is designed for highly accomplished young musicians of middle, high school, and college age; the orchestra is modeled after professional orchestras in repertoire selection and approach. The GMP All-Star Youth Orchestra is projected for national and international performances at the prestigious venues around the world through Global Music Partnership international network, as well as charity concerts to support communities. Each admitted applicant receive 100% GMP Scholarship of Excellence (subject to annual re-audition).  GMP orchestral advisors include artists from world's leading orchestras such as Philadelphia Orchestra, Philadelphia Chamber Orchestra, Baltimore Symphony, Dallas Symphony, Vienna Philharmonic, Konzerthausorchester Berlin, and other.  Led by assistant conductors and supported by GMP Artists and Advisors, GMP Preparatory Youth Orchestra is designed for young musicians of middle, high school, and college age who need an additional preparation and orchestral experience to excel in orchestral performance. The orchestra is projected to perform biannually, including charity/benefit concerts.  GMP Young Virtuosos Violin Ensemble is designed for talented young violinists (age 9-13) to come together, learn and perform an amazing repertoire under the tutelage of award-winning violinist Dr. Yevgeniy Dyo. Dr. Dyo is an expert in Russian School of Violin Training System, violin ensemble repertoire and coaching. A Violin Ensemble is the hallmark of every important music institutions and violin studios including Moscow and other conservatories and schools in the former USSR. The GMP "Young Virtuosos" Violin Ensemble is committed to continue the great tradition of excellence in violin ensemble performance. Besides learning great repertoire, performing in violin ensemble helps with overcoming stage fright and performance anxiety, benefiting artistic development of a young performer.  Directed by distinguished pianist and entrepreneur Hugh Sung, the GMP Chamber Music Program program offers a unique
opportunity to instrumentalists (of any age) to perform in a small ensembles such as duets, trios, quartets etc., learn and perform chamber music repertoire with distinguished GMP faculty and artists. Hugh Sung, has been served on the faculty of The Curtis Institute of Music in Philadelphia for 19 years as its Director of Student Recitals and Instrumental Accompaniment, and brings invaluable expertise to the program. Directed by violinist Meichen Barnes (acting concertmaster of the Chamber Orchestra of Philadelphia) and Derek Barnes (cellist of the Philadelphia Orchestra), the program offers an opportunity to advanced instrumentalists who aspire to learn the art of orchestra playing and preparation for orchestra auditions.  String, Wind, and Brass Preparatory Clinic Module are designed for all GMP ensembles where musicians will be grouped into small units to address basic preparatory elements such as learning parts, addressing basic issues with intonation, technique, and/or solving any other performance practice challenges.  Led by assistant conductors and supported by GMP Artists and Advisors, GMP Adult Amateur Orchestra is designed for adult amateur musicians whose profession is other than music, but who play an instrument and aspire to perform in orchestra. ​ This program is designed for groups of children or adults who never learned to play an instrument but eager to learn and perform in ensemble.
Apply Now
Our Philosophy
We believe that the first step to success and true joy of music making is the highest quality music training.
GMP Education Center is committed to offer first-class music training and performing opportunities to all music lovers irrespective of age, social, ethnic, economic, and disability backgrounds.
Join us!
Program Directors and Leaders
Dr. Vladimir Dyo, Artistic Director
Dr. Rustem Orazaly, Business Director
Maestro Daniel Spalding, Music Director/Conductor
Mechen Barnes & Derek Barnes, Co-Directors. Orchestral Repertoire and Audition Preparation Program
Hugh Sung, Director. Chamber Music Program
Dr. Yevgeniy Dyo, Director. "Young Virtuosos" Violin Ensemble
Tuition Cost and Audition Video Requirements
1. *General Annual Tuition Cost: $700
Tuition Scholarships available based on merit and/or financial needs.
2. Video Audition Requirements:
* Tuition fee is subject to customization depending on program and/or special projects (resulting in higher or lower fee).
* Members of the highly selective GMP All-Star Youth Orchestra receive full tuition scholarship based on merit.
Structure of the Programs
Each program consists of three modules: Each program will be customized by GMP experts based on the nature of the program, level, and aspiration of each applicant to make the experience more joyful and productive. The most exceptional applicants will have an opportunity to perform in ensembles with GMP faculty and distinguished artists.
Locations
Events
GMP All-Star Youth Orchestra performs under the baton of Maestro Spalding at the Young Talents World Festival of Performing Arts 2018 at Carnegie Hall.
Date: December 19, 2018
Venue: Weill Recital Hall at Carnegie Hall 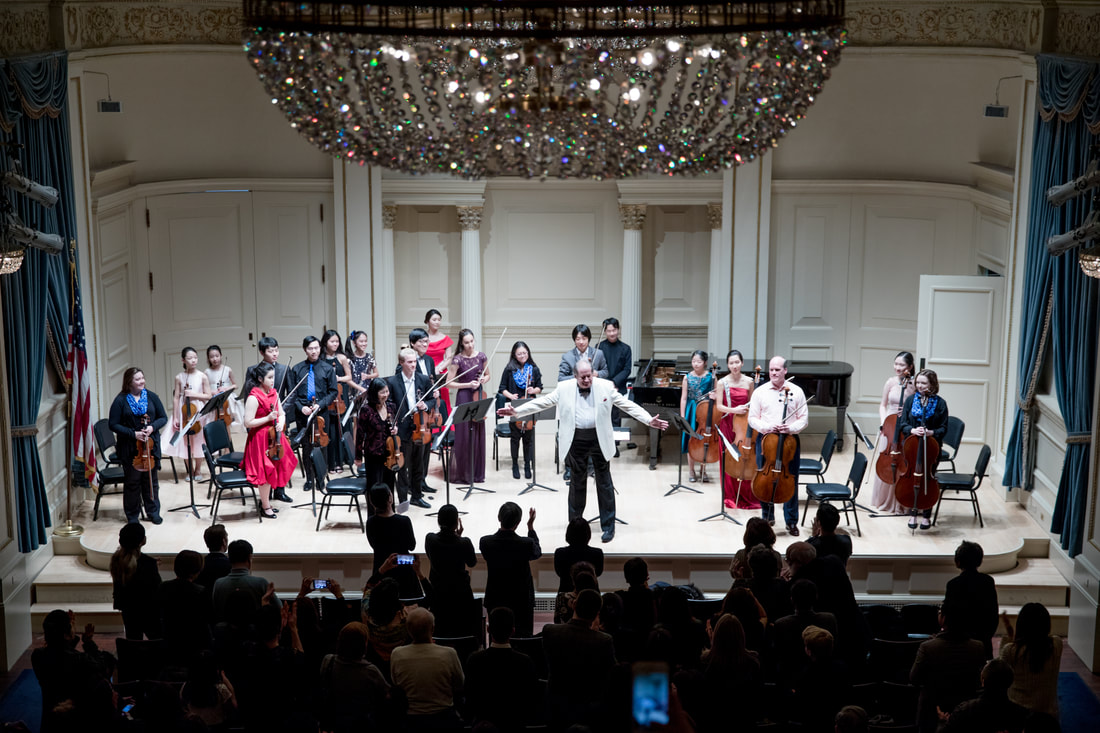