Yevgeniy Dyo
Award-Winning Violinist & Educator
Doctor of Musical Arts
Dr. Yevgeniy Dyo has won awards in numerous international competitions including Grand-Prize at the Shabyt International Chamber Music Competition in Astana, Kazakhstan. Born in Almaty, Kazakhstan, he began his musical education at the age of five, studying violin with Svetlana Abdusadykova and Gaukhar Murzabekova at the Baiseitova School in Kazakhstan, and Eduard Schmieder at Temple University in the USA, receiving his Master’s and Doctor of Musical Arts degrees.

After making his orchestral solo debut with the Kazakh State Symphony Orchestra at the age of nine, he has been a soloist with many leading orchestras in his native country, and a founding member of highly acclaimed chamber ensemble “Musica D’Accordo Astana” at the Astana State Philharmonic Society. He performed at festivals, orchestral and solo recitals in Austria, England, Russia, South Korea, Kazakhstan, Canada and the United States in such prestigious venues as Carnegie Hall, Tchaikovsky Hall (Moscow, Russia) and the UN Headquarters, among others. Dr. Dyo appeared in front of presidents of Kazakhstan and Ukraine and performed at embassies of South Korea and Vatican. He was featured as guest concertmaster of the Capital Philharmonic of New Jersey and took part in a world premiere of Karl Jenkins’ “Requiem” in London under composer’s baton.

As member of the Trio Fontes, Dr. Yevgeniy Dyo has performed in concerts and festivals across US East Coast.

In addition to his musical activities, Dr. Yevgeniy Dyo also serves as President of the Korean Musicians Association in Philadelphia, organizing cultural events and bringing communities together, and serves as faculty at Peddie School Music Department. His students have won multiple awards and performed in venues such as Kimmel Center, Carnegie Hall, Lincoln Center and other venues.
His duo performances with his brother Dr. Vladimir Dyo are available on Spotify, Amazon Music, Apple Music, and other digital platforms.
Trio Fontes 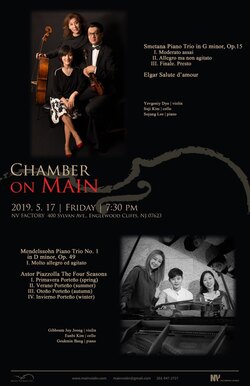